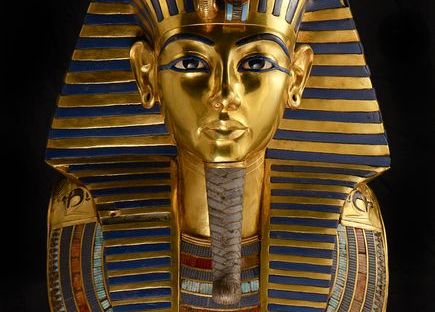 Ever since I first glimpsed this bust on the cover of the “Weekly Reader” when I was in 5th grade, I knew I wanted to be an Egyptologist.  This was long before Raiders of the Lost Ark was released in theaters.  It was something about this death mask that drew me in. After all this time, I no longer truly want to be an archaeologist though the idea still tugs at me from time to time.  My family sent me on an American dig when I was a teenager.  It didn’t kill my desire, but I wound up following a less gritty path in history when I went to college.  It was the mystique of Tut that called to me, and the countless mysteries that needed solving.  I am so glad to be alive in this digitally scientific age that can actually figure out what killed this boy-king.  And today, they released the information:  No, he was not murdered.  Yes, his father was Akhenaten, and no his mom was not Neferititi.  All these answers I hungered for as a young adult.  Now, we know almost without doubt, thank you DNA.  See the story for yourself.

View all posts by BKL